A Fellow of the American College of Emergency Physicians, Dr. David Marcozzi is an Associate Professor and Associate Chair of Population Health within the Department of Emergency Medicine at the University of Maryland School of Medicine. He also serves as an Adjunct Associate Professor in the Department of Epidemiology and Public Health, University of Maryland School of Medicine, the Assistant Chief Medical Officer for Acute Care at the University of Maryland Medical Center and is the Deputy Medical Director for Mobile Integrated Healthcare for the Baltimore City Fire Department. Prior to these roles, Dr. Marcozzi served in the federal government as a senior leader and subject matter expert on health delivery, emergency care, and emergency preparedness.

During his federal tenure, Dr. Marcozzi held positions within the United States Department of Health and Human Services (HHS) and the White House. Serving last as the Senior Advisor for Emergency Preparedness and Acute Care within the Centers of Medicare and Medicaid Services, Dr. Marcozzi was involved with health delivery reform efforts, clinical quality standard and measure development. Before being asked to assume this role, he served as Director of the National Healthcare Preparedness Programs within the Office of the Assistant Secretary for Preparedness and Response (ASPR). Dr. Marcozzi returned to HHS in September 2011 after completing a 3-year detail to the White House National Security Council. There he served as Director of All-Hazards Medical Preparedness Policy. During his time at the White House, he led multiple Sub-Interagency Policy Committees and assisted with responding to several event of national significance.  Before his detail to the White House in 2008, Dr. Marcozzi created and directed the Emergency Care Coordination Center, an office within HHS established to improve prehospital and hospital based emergency care.

Prior to his federal positions, Dr. Marcozzi completed a congressional fellowship at the U.S. Senate. Serving on the Bioterrorism and Public Health Preparedness Subcommittee, he assisted in drafting the Pandemic and All-Hazards Preparedness Act that became law in 2006.

A Colonel in the U.S. Army Reserves, Dr. Marcozzi has been mobilized four times since 2001 and is now assigned to the United States Special Operations Command.  As a prior member of the National Disaster Medical System, Dr. Marcozzi responded to multiple disasters including the September 11, 2001 attack on the World Trade Center.

The author of several articles and scientific manuscripts, he is also the recipient of numerous military and civilian awards including the National Security Council Outstanding Achievement Award, a Certificate of Appreciation from the Assistant to the President for Homeland Security and Counterterrorism, the Army Medical Department ‘A’ Proficiency Designator, the Army Commendation Medal, the National Disaster Medical System Distinguished Member Award and the Duke Emergency Medicine Distinguished Faculty Award. 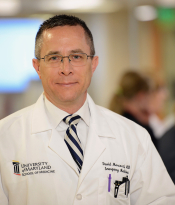