Triage and the Art of Mass Casualty Sorting

Triage is the sorting of patient’s treatment based on the severity of their condition. This is an essential part of responding to a mass casualty incident, when limited resources need to be allocated to maximize the number of survivors. Mass casualty incidents and disasters often cross jurisdictions, bringing responders with a variety of backgrounds. SALT (Sort-Assess-Lifesaving Interventions-Treatment and/or Transport) was developed as an evidence-based non-proprietary triage system in 2008 to allow national standardization of initial triage in all-hazards mass casualty incidents. The Model Uniform Core Criteria for Mass Casualty Triage was later developed to provide key components which a triage system should include to meet the proposed national guideline. It defines criteria in four categories: general considerations, global sorting, lifesaving interventions, and assignment of triage categories. 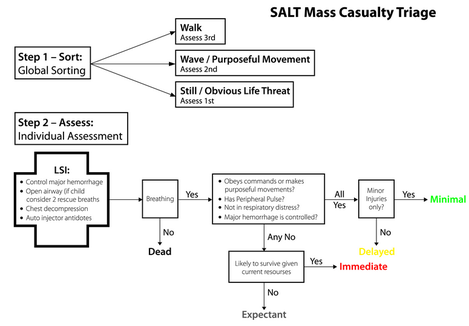 START (Simple Triage And Rapid Treatment) and JumpSTART (for pediatric patients) are utilized in Maryland (and throughout the United States) for initial triage of mass casualty patients. Patients able to follow instructions and walk to a designated casualty collection point are classified as MINOR. The rest of the patients are evaluated for respirations, pulse/perfusion, and mental status (RPMs) and classified as either DEAD, EXPECTANT, IMMEDIATE, or DELAYED. Triage tags have sections for patient information, vital signs and treatment, and peel-off bar codes for monitoring patients throughout their treatment/transport.